The Guild was formed in the 1960’s with a view to encourage and train judges for flower shows in Surrey and the surrounding areas and to keep a list of judges, highlighting their specialities, that local societies could use to select judges to suit their shows.

The Guild was run for many years with Ron Watts M.B.E. as Chairman and Jack Morris F.N.V.S. as Treasurer/Secretary. Anyone who knew Ron Watts will never forget his encyclopaedic horticultural knowledge and his willingness to pass that knowledge on to others. Jack Morris worked tirelessly in his dual role as Treasurer/Secretary whilst also managing to take a leading part in the National Vegetable Society both locally and nationally.

After Ron’s death in 2009, Brian Deaville was elected as Chairman, and he ran the Guild quite successfully until 2016 when he decided to retire, Geoff Peach our present Chairman was then elected to the post.

Jack Morris continued in his own inimical style until 2013 when he too decided to retire. Jack was elected as our first President. Sheila Rapley became Secretary and continues in that role to this day, organising us all very efficiently.

Jennifer Hearn took on the job of Treasurer and unfortunately had to resign for personal reasons, she handed over the very comprehensive accounts to our present Treasurer Rosemary Hucker who is now trying very hard to drag us all into the 21st century by setting up the website.

After Jack Morris’ death, Brian Deaville was elected to the post of President in 2016. 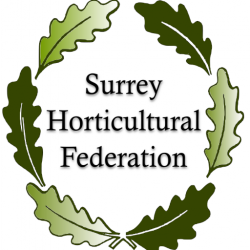 The Surrey Horticultural Federation (SHF) was formed 40 years ago in 1976 as an umbrella organisation to link together Gardening Clubs and Horticultural Societies across Surrey and the edges of surrounding counties.

There are currently 90 clubs within the SHF, and the Guild is a proud member of this non-profit making organisation.

Get to know who us